Volume IV: Analysis of Textual Variants of the Book of Mormon 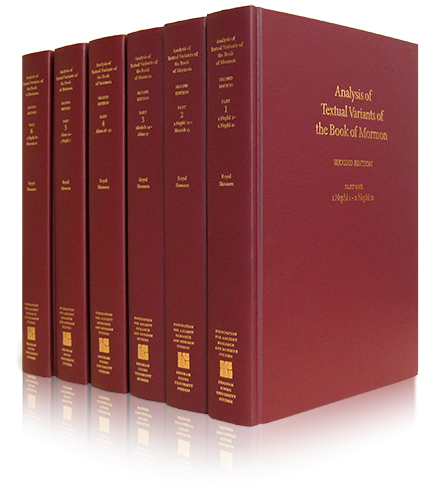 Analysis of Textual Variants of the Book of Mormon is the fourth volume in Professor Royal Skousen’s ongoing Book of Mormon Critical Text Project. This volume in six parts represents the central task of the project: the attempt to recover the original English-language text of the Book of Mormon. Volume 4 considers every significant textual change that has occurred in the English Book of Mormon over the 175 years since Joseph Smith first dictated it to his scribes. It also considers a number of conjectured revisions for specific passages. Professor Skousen draws on the original manuscript of the Book of Mormon, the printer’s manuscript prepared by Oliver Cowdery and two other scribes, and 20 significant printed versions ranging from the 1830 edition to the current standard editions published by the Church of Jesus Christ of Latter-day Saints and the Community of Christ (formerly known as the Reorganized Church of Jesus Christ of Latter Day Saints). Where applicable, he marshals additional evidence of language usage from dialectal and earlier English, as well as data from the King James Bible and the original biblical languages, Hebrew and Greek.

The changes in the second edition (ATV2) include: